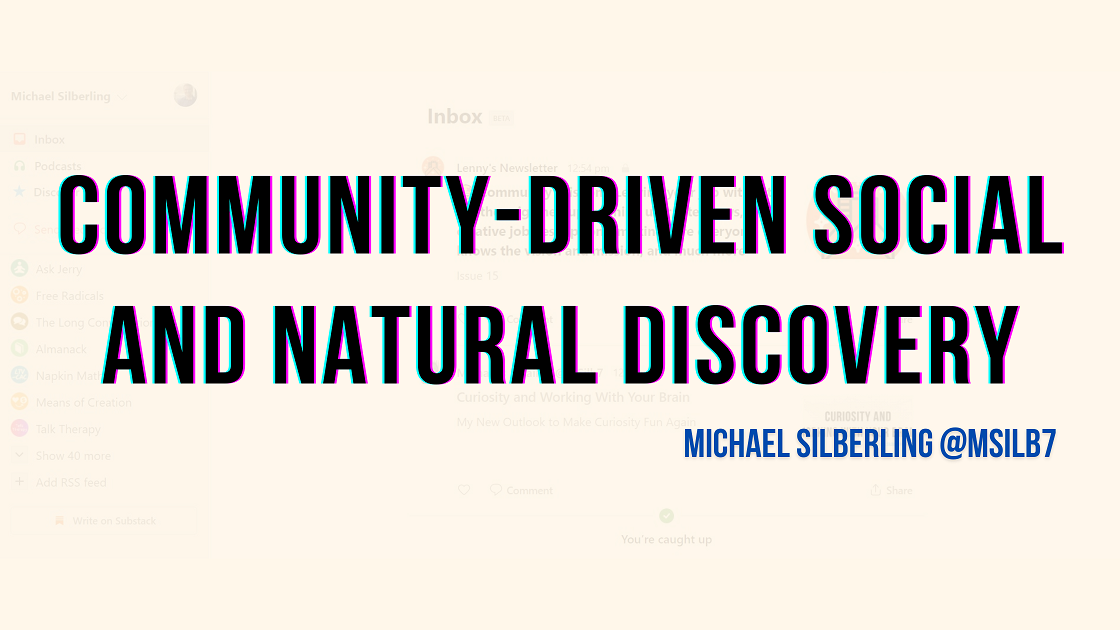 The 2000s brought us the social networks MySpace, Facebook, Twitter, and more. On these “wide-open”  platforms, everyone had a microphone to shout out into the world. At first, this was the novel cool thing to do, and it became addicting. But then, when these platforms needed to turn a profit, things changed. Our engagement was the golden ticket to monetization. If they could get us to post, react, comment, and share more, the advertisers would line up to pay for our attention.

Optimizing for engagement eventually pushed us farther apart. The original promise of social media was to bring us together, and it was failing.

So, this raises a new question. Are “wide-open” social networks the way that we should be interacting with each other? Maybe we should return to our roots in the physical world and build focused communities? Communities with shared interests and ideas, where people feel like they belong.

Facebook arguably benefitted the most from the “wide-open” social network era, but even they see the writing on the wall. Remember a few years ago, when Facebook suddenly started featuring Groups? Now, Groups are one of the center options on the global nav bar. The key mechanic change here is that you (somewhat) choose what you want to see, rather than having an algorithm choose for you.

Who else is bringing about the wave of “community-driven social?” Some names that you might expect, others that you may not:

On Substack, users can subscribe to content from writers and/or podcasters who publish to the platform. I may surprise some people by placing it in the social category, but here’s my case: Readers have a direct connection with the writer, but the collection of readers can also become its own community. Some Substack writers have even created weekly “threads” to encourage their reader community to debate.

The reader community is what I think makes Substack unique for consumers (they do a ton of interesting things for writers as well). Each reader shares at least one thing in common, they chose to subscribe to the same writer. So they at least read the same things, and share the same interest in whatever the newsletter focuses on.

These communities also have a weird quirk: The one writer, or set of writers, becomes the “figurehead” leader of the community. We can debate what that means, but if a wide-open, free-for-all model has already proven to not work, maybe this method is worth a shot?

I’d keep an eye out for any community-driven features that Substack launches. There’s a ton of room for them to work with here. They recently launched a “Reader,” which provides a single location for readers to keep up with their various newsletter subscriptions. I see this unified Substack reader experience as the key building block for them to add community features on top of:

So, this one will be short, because I still haven’t actually used Clubhouse, and at this point I enjoy being the rebel. But, the core mechanics get at the community-driven social trend. At the time of writing, the Clubhouse app has risen to #13 in the US iOS App Store’s “Top Free Apps” rankings.

As I understand it: You can drop in on discussions, which sort of operate like a live podcast or event. On the surface, it appears to have the elements of community-driven social. Users have control over what they do and don’t see, and can choose who they want to follow. But, the live element of Clubhouse, versus asynchronous content on Substack, changes the dynamic a bit.

On each, you still don’t necessarily know what you’re getting into until you click on it. To date, Substack has acted more like a “Shopify” or a “Stripe” backend technology, whereas Clubhouse seems to be like an “Instagram” platform to discover and host content. So, this discovery model may teeter on rehashing the same content moderation issues we’ve seen with wide-open social networks, just with different mechanics.

I’m not sure if Clubhouse is an alternative to social community, or if its actually a new media format that competes with radio and podcasts? Taylor Lorenz of The New York Times reported that Clubhouse is working on a creator monetization program. This could incentivize users to host engaging conversations, suggesting the latter media format strategy. Again, I’ve still never actually used Clubhouse, so I’m just going off of Twitter and news articles.

Update 1/23/21: Thank you to a friend from college for sending me an invite after reading this. I’ve listened to a few dud rooms, and a ‘Virtual Dinner Party’ room that was filled with super interesting people. My thesis about Clubhouse operating more like a media company still stands, although it is uniquely community-driven.

I paired these two together, because 1) They’re pretty much the same thing with a few feature differences, and 2) I always use one to describe the other. I’m in a Discord server with a few friends from home, so that we can play Among Us as a group. To answer “What’s Slack?” for this group, I called it “the workplace version of Discord.” Similarly at work, I’ve called Discord “Slack for non-work stuff.” Each functions like a really big group chat, except that within each group, there are “channels” for discussion topics. As an example, there could be “#sports” or “#product-managers” channels to designate where to have each kind of conversation. Then a user can pick what topics they want to join in on.

Besides work, I’m also in a few Slack channels for podcasts and newsletters that I subscribe to (as nerdy as it sounds). I think of these groups as “tangential communities” to what I described in my Substack section. We all share at least one interest, and there’s way better functionality in Slack and Discord than there is in a comment section. These communities have had some super interesting and insightful discussions, which would be hard to find many other places.

On the other hand, once these communities hit some critical mass of people and messages, they are IMPOSSIBLE to keep up with. I just opened Slack real quick to see if I’m missing anything cool. It feels weird to me, because on Twitter, I’m not concerned about missing anything. Although I’m addicted to Twitter, I feel like if I miss anything important, it will bubble up to me eventually (which is the “pro” case for algorithmic feeds).

Slack and Discord may be the purest definition of “community-driven social.” They're opt-in communities based on a shared interest; however, there's a challenge in how you create a “consumable” experience for members.

I’d be curious to see if either experiments with something here. Following conversations in an algorithmic order may be super difficult. I wonder if auto-generating a “digest” of the top few conversations would work?

On the total opposite end of the spectrum from “wide-open social,” is direct messaging products. The core offering for each is to enable users to send messages directly to individuals or to groups. What I find interesting here, is what gets built on top of messaging. Snapchat has already gone down a media path with their “Discover” tab for short-length shows. It also launched Spotlight in Nov 2020, a Tik Tok-style feature where users can submit their “best video Snaps” for ”the opportunity to earn a share of more than $1 million that we’re distributing to creators every day!” I was just trying to do some first-hand research myself, and fell down a rabbit hole… Where were we again?

Oh yeah, in messaging we’re likely more selective of who we interact with than any other social media type. It may be the most closed social platform today, but it could also become the safe-haven away from wide-open social networks. Like mentioned earlier, Facebook already knows this. Mike Isaac of The New York Times reported all the way back in Jan 2019 that Facebook planned to merge Instagram, Facebook, and WhatsApp messaging together. Facebook took the first step by merging Instagram DMs and Facebook Messenger in Sep 2020. I wouldn’t be surprised if Facebook kills the News Feed over the next few years in favor of a groups and messaging experience.

Snapchat appears to be going down a different path, more towards being a media company like I called out with Clubhouse. I originally grouped Snapchat and Messenger together around the “messaging” theme, but now this seems silly.

Ready for a big leap?

Facebook’s Diem (formerly Libra) peer-to-peer crypto network for payments is expected to launch in 2021 (per CNBC). If you think about Diem in context of Facebook’s unified messaging experience, you might start to get an idea of what I think they’re be building towards. In the early days of Facebook, Mark Zuckerberg wanted to build a peer-to-peer file sharing network called “WireHog” into the platform. That was until Sean Parker, who dealt with his own peer-to-peer issues at Napster, killed the idea (as reported by TechCrunch). But, this story leads us to believe that decentralization and peer-to-peer networks are not a new idea for Facebook’s leadership.

I’d watch out for Facebook to position their unified messaging experience as a central hub for consumers to take part in the decentralized web (often called “Web3” or “Web 3.0”). Maybe it’s as a bank, a commerce layer, both of these and more, or something else that I can’t see right now… but there’s something interesting brewing there. This is not where I expected to get to from “Community-Driven Social,” but here we are. We need “The Social Network 2" to get made.

I went into this expecting to write about how community-driven social media is on the rise and the wide-open networks may not be on their way out. I thought I’d explain how we can build a more controlled and private social media experience as the path to intellectual freedom. I was going to make a call to guide people towards groups and eliminate the algorithmic newsfeed. But now, I wonder if the core issue is actually how we manage discovery? Once content that you never asked to see, or wanted to see, is automatically placed in front of you, have we already lost?

It’s almost like we need some friction to discover new content, so we know that we really want it. Once we introduce algorithmic recommendations, we rehash the old problems of wide-open social.

Maybe our social discovery experiences should try to emulate something natural like “word of mouth,” rather than "we know what you want?"

I’m not against algorithmic sorting, that’s what makes Twitter consumable. I’m against defaulting to algorithmic recommending, when it doesn't actually benefit the consumer. Let me know what you think.

‍Also, Google+ Circles were ahead of their time.

My Thoughts: It’s weird to me (with 20/20 hindsight in 2020) that Google+ marketed their value prop as “is this person really my friend?” It feels negative, rather than productive. If I were to do this today, I’d maybe highlight a close friends group (like Instagram today), but then gear it around what type of interest or topic does this person fall under for me? When do I want this person to pop up for me? Maybe that minimizes people, but for social products on the internet, I feel like we’ve already kind of jumped the shark on that.