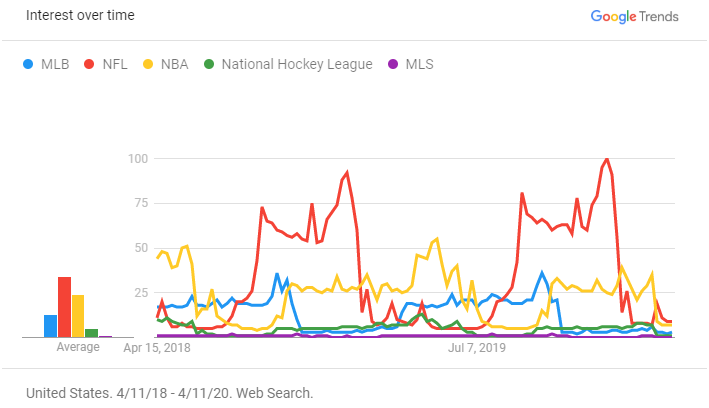 The MLB's Sandlot Environment: Ideas to Take Back Sports

Subscribe to my newsletter
April 11, 2020
|
Sports and Fantasy Football

Ideas to Take Back Sports Including In-Season Promotion and Relegation, Mic'ing Up Every Player, and Introducing One-Pitch Strikeouts.

Friday morning, Bob Nightengale from the USA Today outlined MLB's ideas for playing a quarantined season split between Spring Training facilities in Arizona and Florida. There could be division realignment into the Cactus and Grapefruit leagues, shortened 7 inning games, doubleheaders, a universal DH, and who knows what else.

The Only Show In Town

It's no secret that baseball, "America's Pastime," has settled into the 3rd most popular sport behind football and basketball (see Google Trends Data below). The MLB has a slight window in July where it's the first or second option, but with every sport canceled, overall interest is near zero. So, MLB can capitalize by being the first league back in action, and potentially engage fans for life.

As a base case, this is essentially a lost season. If the MLB plays one single game this year, it's a win. If they do anything more, they're playing with house money, which provides them with the freedom to rapidly experiment and iterate on new ideas. The MLB has previously partnered with independent leagues to experiment with ideas like robot umpires, but an experimental season lets the MLB try out these ideas at the highest level of baseball, with a built-in fall back of reverting to normalcy back to normal in 2021 if new ideas flop.